The housing market has shifted with an unexpected, sudden jump in demand.

Demand: In the past month, demand has increased by 64%.

After the first month of 2015, it certainly looked as if this year was going to be a mirror image of 2014. In terms of demand, the number of new pending sales over the prior month, year over year was nearly identical. But, in the first two weeks of February, the market shifted and is now doing its own thing.

Demand ignited and increased by 566 pending sales in the past two weeks and now totals 2,619. It did not reach those levels last year until April. The two week surge was the largest increase since February 2012. Last year at this time demand was at 2,381 pending sales, 9% fewer than today. As a result of the rapid increase in demand, the expected market time dropped to 62 days from 78 just two weeks ago, pushing housing deeper into a seller’s market. 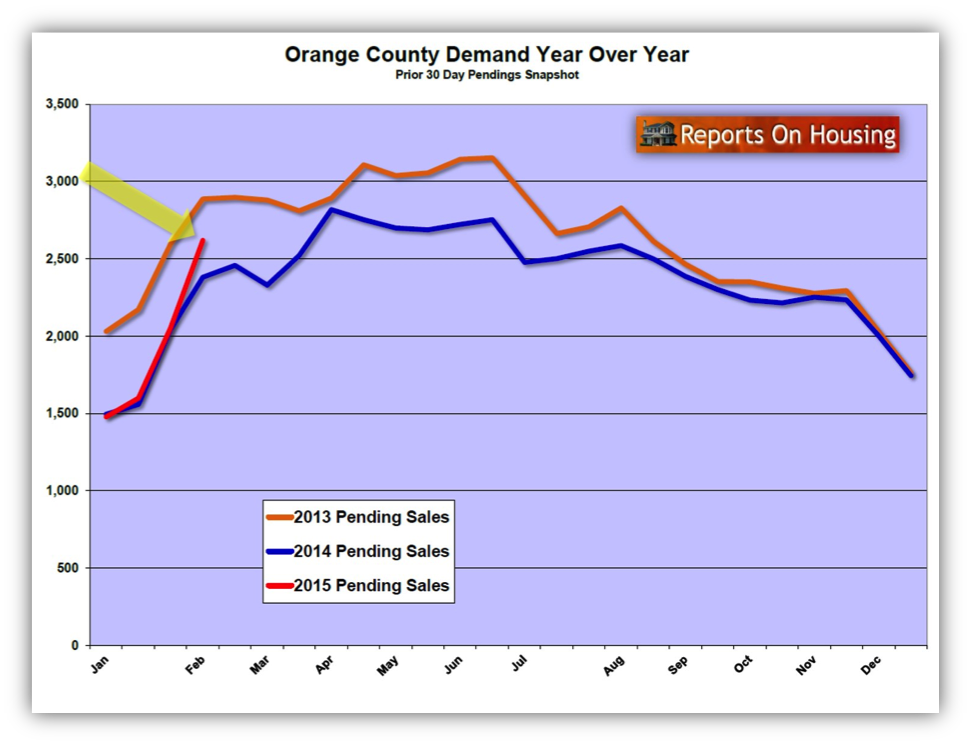 Something just changed in the market that has sparked demand. It’s not values; homes have not all of a sudden gotten a lot cheaper. On the contrary, homes are a bit more than they were a year ago. Is it the gigantic savings at the gas pump? Yes, gas prices have dropped substantially, but those savings have not resulted in anybody stock piling enough money for a down payment on a home. Low gas prices have helped boost consumer confidence, but will not prop up the residential resale market in an area where the median sales price is nearly $600,000. The big difference in today’s market is cheaper money in the form of low interest rates.

Buyers are making the wise choice, to buy now because rates are cheap and are back down to historical lows. They may not fully know just how genius of a move it is by pulling the trigger now. Current interest rates are historically low for a reason, because they have been artificially pushed down by the Federal Reserve for years. The Federal Fund rate has been kept at nearly zero since December 2008. They have hinted at raising it this year. As the short term rate increases, long term rates, home mortgages, will soon follow.

Let’s look at where rates have been historically. Prior to the Great Recession, interest rates were at 6.5%. For the December median sales price home, that’s an extra $731 per month every single month. In 2000, rates were at 8%, or an extra $1,212 per month. In 1990, rates were at 10%, and in 1981 they reached 18%. The point is simple, today’s rates are unbelievably low and buyers should take advantage of this gift, complements of our federal government.

Are rates going to reach those prior year levels? Not anytime soon. We are more likely looking at rates in the low to mid-five-percent range within the next couple of years. That may not be astronomically higher, but the difference in monthly payments will put a dent in buyers’ pocketbooks and their monthly budgets. For now, cashing in on rates today means more disposable income saved as rates eventually increase. Rates will increase, it is just a matter of when.

Active Inventory: The inventory rose by only 2% in the past two weeks.

The active inventory added an additional 118 homes in spite of a huge shift in demand, and now totals 5,449. Since ringing in the New Year, the inventory has increased by 9%. Last year at this time there were 5,283. The current inventory is up only 3% year over year.

The big question is where do we go from here? Some speculate that the market will continue to catapult forward and the listing inventory will have trouble rising as higher demand prevents it from increasing. However, the 2015 market is not at all like the heydays of 2012 through 2013 when home values were soaring from month to month. Instead, home values have already inched closer to their prerecession levels. Many argue that we will not reach those levels soon because they were achieved on the backs of subprime mortgages where fogging a mirror was just about the only requirement in obtaining a loan.

It is more likely that the discerning buyer will continue to adamantly demand to pay the Fair Market Value for a home this year. From the official start of spring, the end of March, through the start of summer, the end of June, more homes will come on the market than any other season. Success is determined by a seller’s price. A flood of overpriced homes hitting the market all at once has a strong potential in cooling the current trend in increased demand. There’s just not much room for appreciation unless we start seeing incomes rise. 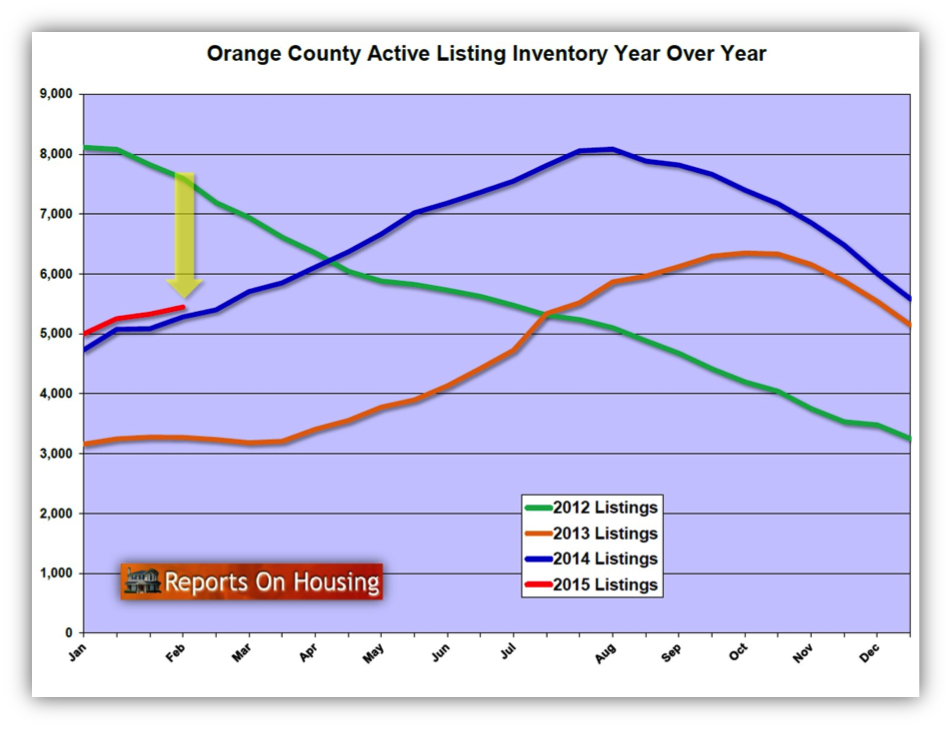 Distressed Breakdown: The distressed inventory increased by 6 homes in the past two weeks.

The distressed inventory, foreclosures and short sales combined, increased by 6 homes in two weeks and now totals 256. Year over year, there are only 8 fewer homes today. Only 5% of the active listing inventory and 8% of demand is distressed. Distressed properties continue to play an insignificant role compared to just a few years ago. 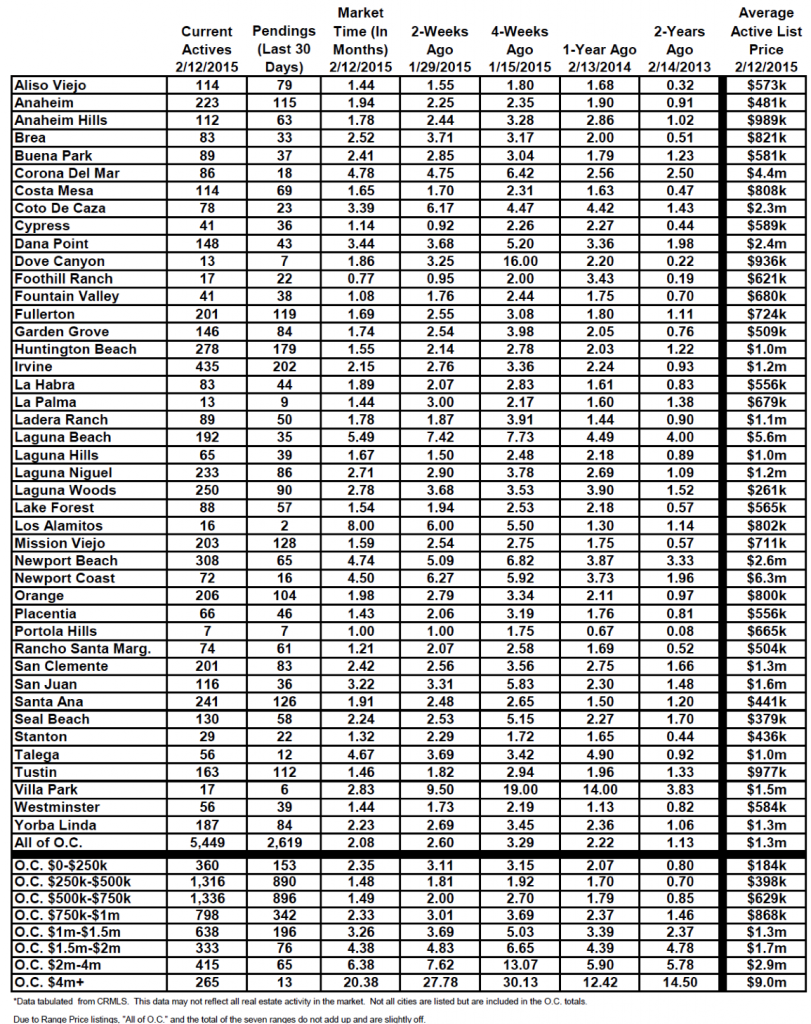 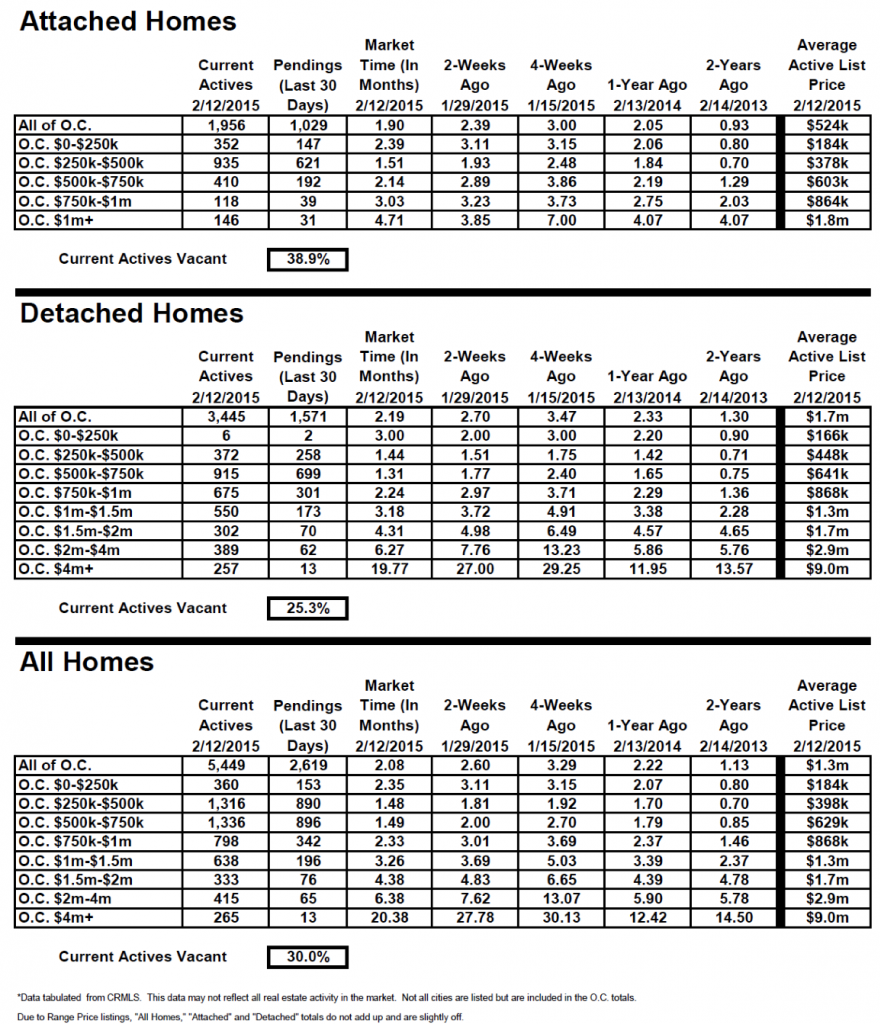 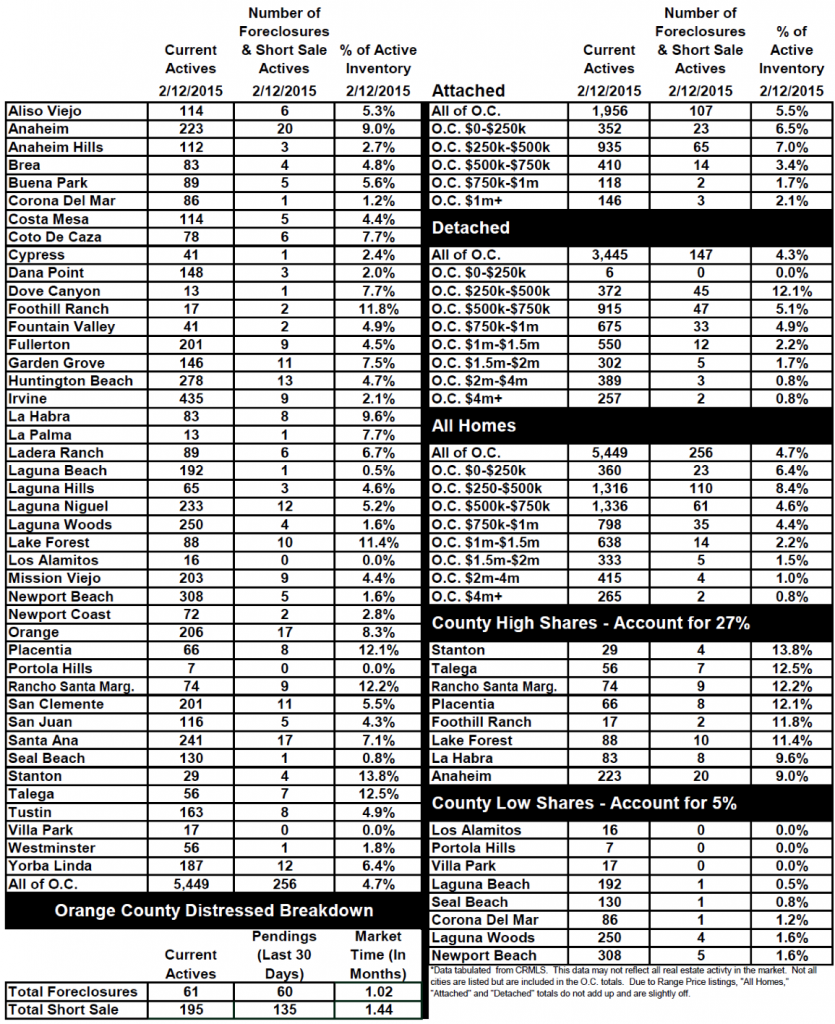 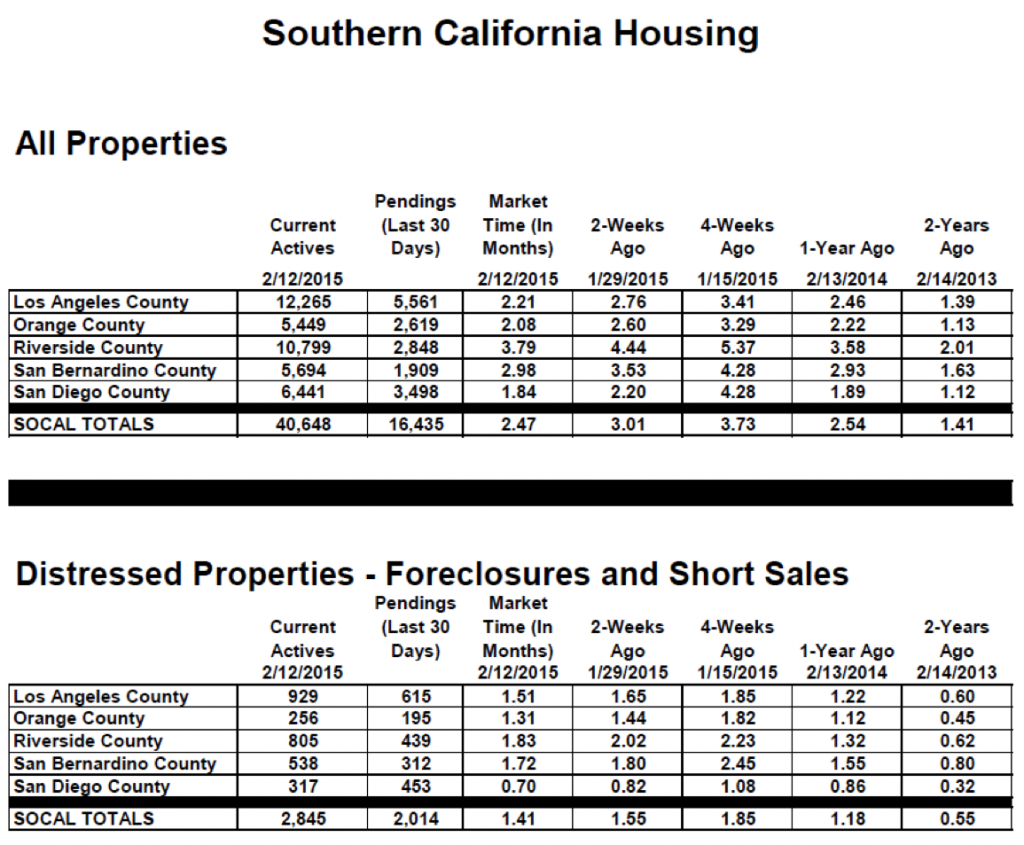